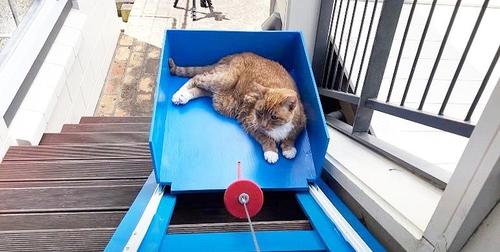 Having a pet can be life-changing for the majority of us. Even if you can’t comprehend each other’s language, it can feel like you have a best friend who lives with you and talks to you every day. Most pet owners will go to any length to ensure that their animal is happy, healthy, and safe. People all throughout the world, including YouTuber Liam Thompson, have been inspired by this great sentiment. 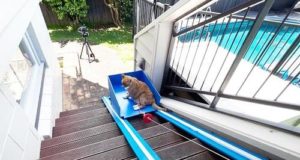 Thompson, who hails from New Zealand, is known for posting videos of himself creating new inventions and experimenting with various concepts. Thompson’s aging cat, Frodo, is someone who is really significant to him. Even though the lovely cat is close to 20 years old, he still makes his way down the steps toward the backyard pool to lay in his favorite sun area.

Thompson was moved by this and went above and beyond to make Frodo’s travel across the backyard as simple as possible. In order to help the elderly cat travel less and put less strain on his body, the YouTuber decided to create an elevator for him, eliminating the need for him to utilize the stairs.

Thompson set about designing the ideal elevator for his senior cat, using his imagination and a variety of construction materials. He shared the results of his ingenious undertaking with the world, showcasing his hand-crafted elevator. 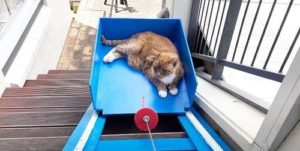 Thompson is recognized on YouTube for his self-made creations, which include a robot butler and a cardboard submarine. His fun job, according to his bio, is doing “dumb stuff on camera.” While Thompson appears to like what he does, it’s clear that his wacky films and brilliant inventions have endeared him to people all around the world, including one from November 2021 in which Thompson built an elevator for his aged cat.

Frodo, Thompson’s cat, is approximately 20 years old, making him a senior feline. Frodo enjoys walking down the stairs to Thompson’s backyard and sitting in his regular area by the pool, despite his advanced age. Thompson wanted to do something to help his elderly body not have to move as much after seeing how persistent his cat has remained to relax in the sun.

Thompson showed viewers how he hand-crafted an elevator for his cat that would be built on the same set of steps that Frodo travels down every day to get to his spot in the sun in a video he released.

Thompson started his effort by creating the track for the riding elevator. He successfully put the track together by using a few thin pieces of wood and attaching them to sliding door rails. Thompson then built the cart that would transport Frodo. Finally, the YouTuber built the parts and an electric hoist to assist the elevator in moving up and down.

For the test run, Thompson put a stuffed animal on the makeshift elevator system and tested his creation, with the stuffed animal instantly flying off. After tweaking the speed and adding some support on the cart, he managed to create something safe and stable for his cat.

Thompson added some final touches, making sure everything was working properly and was aesthetically pleasing. Finally, it was time for Frodo to try out his new elevator. The elevator was a huge success, despite Frodo looking incredibly sleepy. After taking the elevator down, the happy cat quickly went over to sit in his favorite spot. When he was done lounging, Frodo took his new elevator back up to Thompson’s house, with Thompson supervising him the entire time.

The video has since gone on to be viewed more than 2.2 million times as people have continued to marvel at the creative and innovative way Thompson helped out his furry friend. It’s clear that Frodo wasn’t the only fan of the elevator as several people left positive reactions in the YouTube video’s comment section.

One person commented, “The funniest thing about this is that this 20-something-year-old cat actually understands how it works! He just lies there until he reaches where he wants to go.” Another person said, “Frodo is one lucky cat. He literally had the most attentive servant who anticipates his every whim.” A third person wrote, “I almost cried seeing this, you’re a wonderful pet owner for even considering this, let alone implementing it. I hope he has many easy days of happy life with you!”