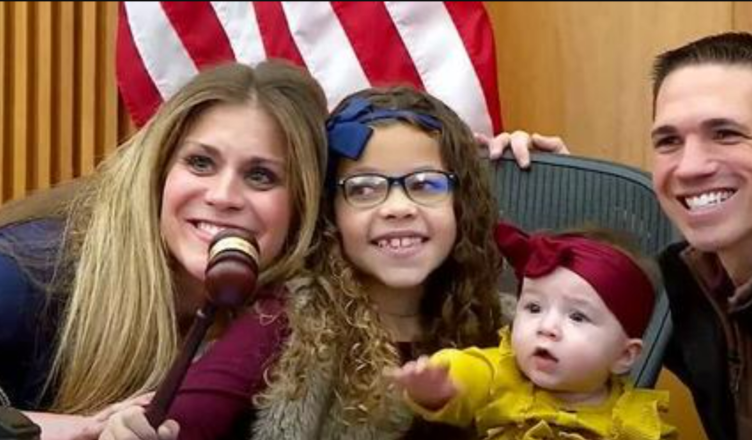 In March of 2022, a man named Bruce Faltynski, who worked as a police officer in the city of Mishawaka in the state of Indiana, and his wife Shelby adopted their daughter Kaia, who was then 8 years old.

Doing so allowed them to fulfill their long-held wish of having a child of their own, however, they had no idea that this was only the beginning of their road toward becoming parents to not just one but two children.

A few weeks after Kaia was officially recognized as their kid, the Department of Child Services (DCS) gave them a call to let them know about a baby who was looking for a family to adopt her.

The child was less than 24 hours old when DCS made contact with them about the situation. It came out that the infant was placed in a box designated as a safe haven.

According to the Indianapolis Star, the Safe Haven Law in Indiana allows a person to anonymously hand up a child who is less than 30 days old without having to worry about being arrested or prosecuted for their actions.

In the meanwhile, the mission of Safe Haven Boxes is “to prevent the unlawful abandoning of infants by raising awareness, giving a 24-hour helpline for moms who are in trouble, and offering the Safe Haven Baby Boxes as a last resort alternative for women who wish to preserve total anonymity.”

During the month of November 2022, Bruce and Shelby officially adopted Myah on Adoption Day in St. Joseph’s County.

Adoption Day is one of those days that families who wish to get to have a baby look forward to as they finally get the opportunity to finalize their adoptions in court.

Shelby referred to the new addition to their family as a prayer that had been answered.

She continued by saying that she and her husband share the hope that Myah’s mother would look at them as an answer to prayer now that their daughter has found a place to call home with them.

“It simply makes me believe that mothers are aware that they have a choice. Myah was definitely an answer to our prayer, and I hope that we were an answer to the prayer that her mama was praying for as well.”