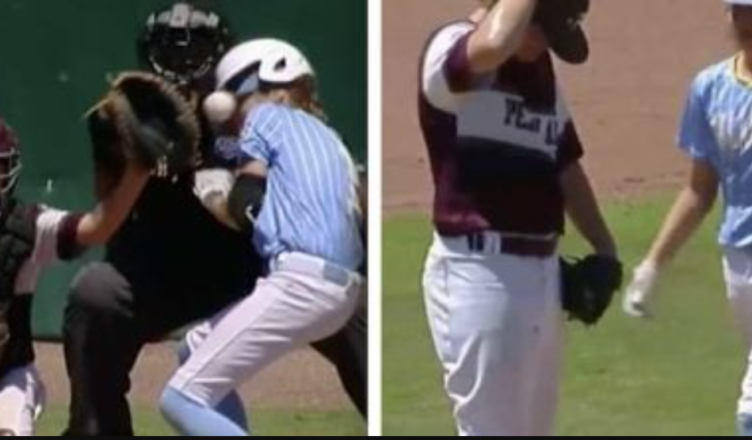 Children can be quite awesome at times. For a very beautiful reason, the video of a young baseball player’s reaction after being struck in the head by a ball while he was up to bat has gone viral on the internet.

During the game, Shelton made a pitch that caused the ball to strike the ear cover that was on Jarvis’ helmet, which caused it to fly off of his head. After a few seconds, Jarvis collapsed to the ground, holding his head in his hands.

The coaches ran over to assist Jarvis as soon as they saw him. After a minute had passed, Jarvis was now standing on first base. Shelton, however, was unable to throw because he was weeping and hung his head on the pitcher’s mound while trying to pitch.

Jarvis went up to the pitcher and offered him a hug after seeing that Shelton was in a bad mood.

Overheard by the pitcher, Jarvis is encouraging him by saying, “Hey, you’re doing absolutely wonderful. Let’s go.” They are quickly joined by the couches and the other players who are concerned about the safety of the duo.

After seeing the heartwarming scene, the spectators at the game for children aged 12 and under offered a standing ovation.

Shelton shared his thoughts on the matter, saying, “I think he was genuinely wounded.”

He freely acknowledges that his first assumption was that Jarvis was going to come up to him in order to “throw a punch.”

Shelton described the experience, saying, “He held me, and that made me feel a lot better about myself at that same time.”

Jarvis said that he and Shelton are “very good friends” and that “baseball is just a game.”