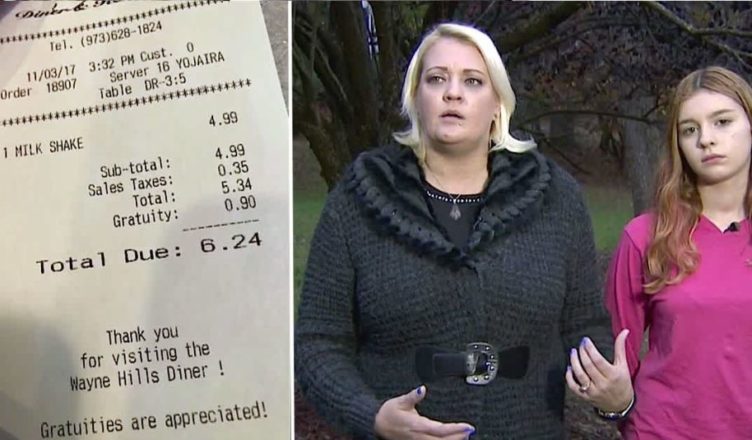 Melissa Desch and her family have been regulars at the one restaurant in Wayne, New Jersey, for a couple of years now.

At this establishment, “gratuities are welcomed,” but they are not necessary and, at the very least, this is what can be seen written on each and every one of its receipts.

One day, Bella, who was 11 years old at the time, went to the restaurant with a bunch of her friends. She placed an order for a milkshake and then texted Melissa a copy of the receipt that she had signed.

When Melissa looked at the bill, she discovered an additional price that Bella didn’t have, and she also observed that Bella’s pals had identical costs added to their milkshake orders as well.

Although Melissa had visited this restaurant earlier in the day, she did not notice any unusual prices when she paid for her meal. A so-called “teen tax” had been applied to Bella’s account.

Former waitress Erika Carty said in a remark on the diner’s Facebook page that having kids as customers may be irritating.

” I can personally speak to how aggravating it is when a group of six to eight teenagers walks into a restaurant, takes up two or three tables, orders something that costs one dollar, sits at those tables for a couple of hours, and then leaves a mess behind without leaving a tip. It will be beneficial for the restaurant.'”

Because Melissa was so disturbed by the unanticipated fee, she vowed never to set foot inside the café any again…