In Iowa, an elderly couple celebrated their wedding anniversary in the most memorable way conceivable. The 97-year-old woman, who had no gown on her wedding day, eventually wore one during her reenacted marriage ceremony 77 years later.

Nothing beats seeing the great union of two individuals who are madly in love with each other. This is why the team at St. Croix Hospice in Iowa was so lucky to witness Frankie King and her husband’s emotional reunion.

On September 16, 1944, King married her husband, Royce. She didn’t have a gown to wear on her wedding day at the time. She did, however, get to wear a stunning antique white gown to her wedding ceremony, which was conducted by hospice personnel on September 24, 2021.

The reenacted wedding was full of emotional moments, and the entire hospice staff couldn’t stop swooning over the charming pair. Henry Michaelson, a photographer and St. Croix Hospice employee, gave her thoughts on the occasion:

“It was difficult not to cry behind the camera as I witnessed the emotion with this gorgeous couple, as well as the love and care that their crew poured into arranging this event for them.”

Sue Bilodeau, the couple’s daughter, was also present and assisted her mother in getting ready. In his Air Force uniform, King’s 98-year-old husband stood at a makeshift chapel covered with flowers, waiting for his loving bride. 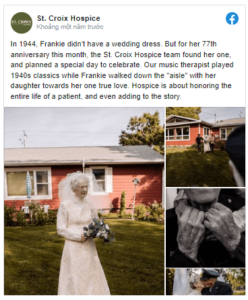 The reenacted wedding occurred after the hospice staff inquired about the elderly couple’s wedding photos. Sue Bilodeau, King’s daughter, described why her parents were never able to enjoy a lavish wedding:

“We got married on a two-day notice while Dad was merely on a brief leave… before he went overseas in World War II,” Mom said. “And we didn’t have time to organize a large wedding.”

St. Croix Hospice has been providing care and assistance to King and Royce at their Oelwein residence. A few weeks ago, the hospice staff decided to give their garden a facelift, transforming it into a 1940s-style wedding site. 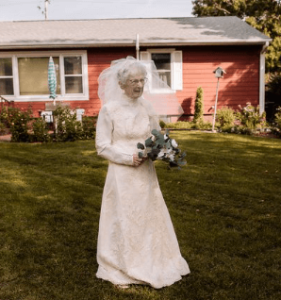 The couple’s music therapist added to the occasion by performing 1940s popular songs on his saxophone and guitar. Kacie Derr, another St. Croix Hospice employee, recalled the unforgettable event:

“I wish everyone could have seen the sparkle in her eyes. She told me she felt stunning.

Royce and King looked into one another’s eyes, holding and kissing as they posed in front of the flower-adorned archway. Bilodeau went on to say that when her father met her mother, he had the largest smile in the world and didn’t stop beaming. 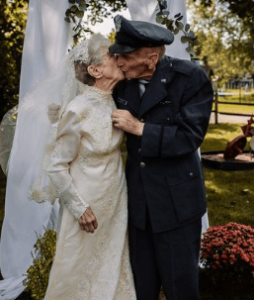 The Kings, who have two children, four grandchildren, and numerous great-grandchildren, relived the most important day of their lives in front of a large crowd. Netizens enjoyed their heartwarming reunion and were ready to give their heartfelt thoughts.

“Breathtaking moments caught in so many ways,” one person remarked. “This is one of the loveliest things I have seen,” said a second user. Thank you to the hospice and everyone who helped make this a wonderful day. My eyes welled up with tears. Lovely!!”

Another person praised the hospice staff’s thoughtfulness: “What a lovely pair!” “Thank you to the Hospice team for providing them with such a memorable day!”