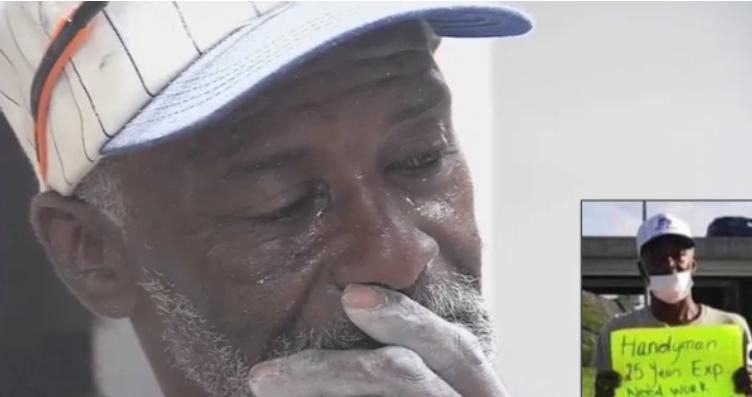 Robert Simpson, one handyman from Kentucky, found himself unexpectedly jobless, seeking for employment, and homeless as a result of epidemic, before he used to support his family by working as a handyman and taking on a variety of odd tasks across the community.

After that, he was forced to leave his flat and with his girlfriend, and their kid, who is six years old, were obliged to book a room at a hotel so that they would have somewhere to sleep. 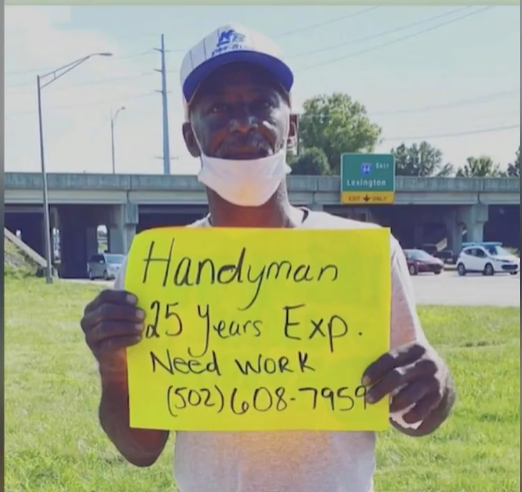 The only source of income was a little check from the government for disability, so there just wasn’t enough money coming in each month to cover expenses. Therefore, the jobless handyman who was seeking for job went out into the community carrying a sign that stated, “Handyman, 25 years of experience, Need work.”

He gave the following explanation: “I simply thought I’d go out there and see if I could get a job.”

For a whole week, Rob displayed his sign on the side of the road while standing there. He endured the sweltering heat every day in the pursuit of employment, despite the fact that the temperatures were dangerously high.

The proprietor of Greenstar Home Remodeling, Kyle Kark, came upon a picture of Rob while browsing the internet and came to the conclusion that he should provide the jobless handyman who was searching for employment the opportunity that he had been yearning for.

According to what he stated, “We simply made the choice to have him come on, don’t know whether we’ll always have anything for him, but we’ll do all we can to help him get back on his feet”.

Rob was recruited by Kyle to assist with part of the demolition work. Rob showed up for the work without even inquiring about the compensation.

The handyman stated, “I began off as a painter, and then I became a landscaper, as well as doing mechanical work and roofing, basically, everything I could do to make money, I did.”

Because Rob does not have his own mode of transportation, Kyle is the one who drives him to and from work each day, and on the very first day, not only did he pay Rob for the job he had done, but he also purchased food for Rob’s family.

Rob demonstrated that he was willing to work hard and put in the necessary time to earn his keep and as a result of that, Kyle was motivated to assist him in any way he could.

Therefore, he also began a fundraising effort with the objective of having other members of the community assist this family in regaining their financial footing.

Kyle wrote this about the once jobless handyman who was searching for work: “Rob is a modest guy and has never once asked for a cent he has not earned.”

However, he and his family lack critical requirements such as a car and a stable place to dwell; hence, Green Star is hoping that you can join us in aiding our neighbor.”