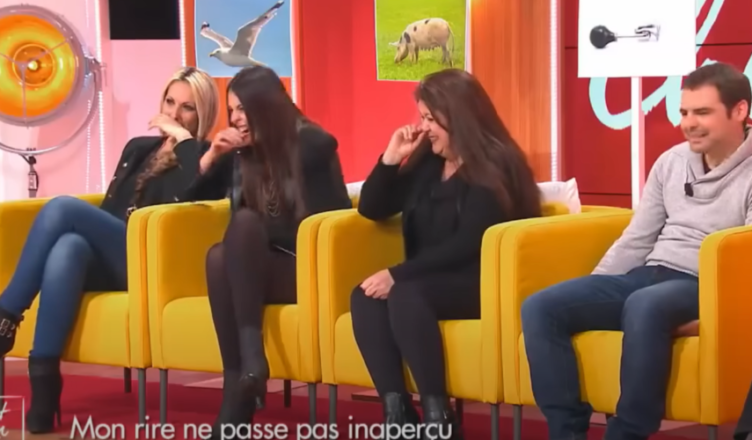 A French television show invited a group of people with extraordinary laughs and asked them to sit together on stage, which ended pretty much as you’d expect. I dare you not to laugh while watching this video.

The segment from the show C’est Mon Choix is titled “mon rire ne passe pas amerce,” which translates to “laugh does not go unnoticed,” and it immediately becomes apparent why. All of the people featured had one thing in common: their peculiar laughs.

The video shows a few people sitting on stage in front of a live crowd, but it’s hard to comprehend what’s going on. Not only because it’s in French and ‘Je ne parle pas français,’ but also because there’s a never-ending stream of extraordinary laughs throughout the entire section, complete with honks, squeaks, shrieks, and even a few pig-style snorts thrown in for good measure.

The infectious nature of the laughter says that there is no respite from the cacophony; even the host, Évelyne Thomas, can’t hold back her own, slightly more sedate, laughter as she attempts to converse with someone in the audience.

A clip of the sector recently resurfaced on the internet, where it has been viewed over 5.6 million times, reposted over 40,000 times, and elicited numerous comments from people who were laughing as hard as those in the original video.

One viewer commented on the video, saying, “Ambulance needed-many ribs cracked, almost threw up.” That is hands down, without a doubt, the coolest thing I’ve ever seen. I’m almost relieved I saw it now because I know it won’t get any better. ”

“This goes from mildly entertaining to one of the best comedy climaxes I’ve ever seen,” said another.”It’s pure joy.”

“Sometimes we all need a good laugh,” someone else said. No matter how bad things are, I dare you not to smile while watching this. ”

While a fourth person remarked, “This simply sounds like the background interactions in the cantina scene in Star Wars.”

Dan Walker, a Channel 5 newsreader, also took part, sharing the clip with the message: “Dear TV Execs, half an hour of this please.” Each week, Forever. ”

I’d keep an eye on that, Dan; I think you’re onto something here.