When a woman purchased her wedding gown from a department store in 1953, she had no clue that her granddaughter would wear an identical gown six decades later. A young woman from Missouri told the tale behind this classic gown.

Julia Cain wore her grandmother’s gown in 2016, although her mother, Susan Kay Traver, wore it as her wedding gown more than three decades earlier. Furthermore, all three women walked down the aisle clutching the same man’s hand.

Harold Cain, Cain’s grandpa, had no idea his daughter and granddaughter would reuse his wife’s gorgeous white gown. He was overjoyed to see Cain transform the heritage gown into fashionable attire.

On May 9, 1953, Phyllis Jo Raymond married Harold in the classic gown for the first time. She looked gorgeous as she walked down the aisle with him, dressed in a white gown she purchased in Denver, Colorado.

Traver, Cain’s mother, wanted to wear the same outfit on her wedding day thirty years later. She didn’t want to wear a hoop skirt underneath like her mother, so she had the jacket changed to fit her shoulders.

Cain was the third bride to wear the white gown. “We never believed I’d wear it for my wedding when I first tried it on as a teenager,” she told ABC News. 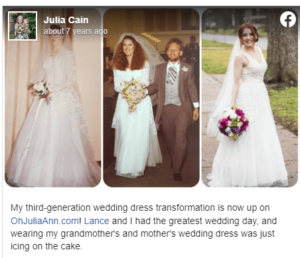 Traver regularly discussed recycling the outfit for Cain’s wedding when she was still in college. Cain didn’t give her mother’s suggestion much thought because she had no intentions of marrying at the time. She didn’t think about it until she got engaged years later.

Cain eventually received the dress she wanted after many trips to the tailor.

Traver carried the outfit from Springfield, Illinois, to St. Louis, Missouri, after Cain informed her mother she wanted to try it on. “This time, the dress did not appear flattering, and we became concerned,” Cain recounted. 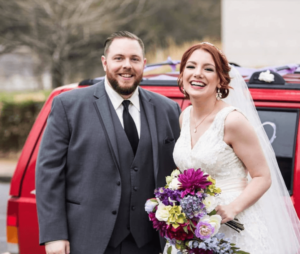 Cain stated that she tried the dress on in several ways, including removing the sleeves and deepening the neck, but she and her mother did not like how it appeared. They were about to give up when they saw what was missing from the robe.

Cain and her mother had no concept that something as simple as a ribbon around the waist might alter the appearance of the garment. “I converted the gown into my dream dress by visibly increasing the waistline a tiny bit!” Cain was exposed. 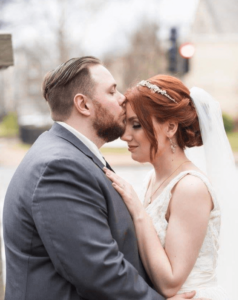 The young woman knew her grandmother would have approved of the concept of recycling the bridal gown, so she went through with it and started looking for a tailor.

Cain also had the gown professionally cleaned before walking down the aisle. She explained that her fiance knew she was going to wear an antique gown, but he had no clue how it would appear after the change. Cain admitted:

“Although it is still less expensive than many new gowns, changing a 60-year-old garment is not cheap, 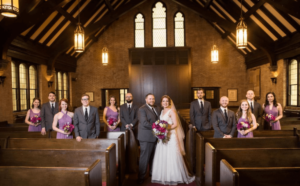 Cain eventually received the dress she wanted after many trips to the tailor. She thought she couldn’t have asked for a nicer wedding gown, and recycling her grandmother’s gown gave her a beautiful tale to tell the world.

She felt like she was in a dream as she donned the white gown on her wedding day and walked down the aisle clutching her grandfather’s hand. Harold was overjoyed to see her dressed like that, she claimed, adding:

“It’s not only romantic, but that man likes a bargain.” 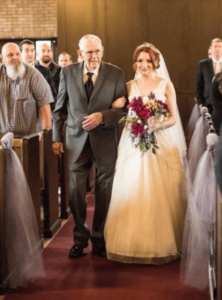 Cain went down the aisle with her grandfather on March 12, 2016, because her father had died several years earlier. Harold had traveled from Colorado to attend her wedding ceremony, she claimed.

“Because I was the first of the grandkids to marry, it was an emotional day for everyone,” Cain recalled. She also urged other brides to choose heritage dresses because the end result would be one-of-a-kind. She did, however, warn them about the exhausting procedure.

Cain initially urged other brides to see if their vintage gowns could withstand a thorough washing before revamping them. She thought that talking well with the tailor was important if you wanted to get your dream outfit.