There was no doubt about Loretta Lynn’s feelings for Alan Jackson, and vice versa. They admired one another and enjoyed a connection that spanned decades.

Lynn made Jackson’s induction into the Country Music Hall of Fame even more memorable by surprising him at the ceremony in 2017.

Lynn died on Tuesday, October 4, at the age of 90. Jackson tweeted two images of them together, one of which was shot at his Hall of Fame induction ceremony.

“Sweet @lorettalynnofficial, there will never be another Honky Tonk lady like you,” he commented beside the photographs. I’m going to miss you. – AJ” 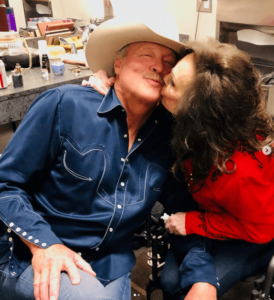 Melissa Schleicher, Lynn’s hair and makeup artist, posted a video showing how significant Jackson was to Lynn. As Schleicher put it:

“For years, as I was getting Loretta dressed, she would constantly ask about @officialalanjackson and tell me how much she adored him.” “I was getting her ready with [her daughter] @patsylynnrussell one day when I contacted Alan and asked him to surprise her, which he of course did.”

The video captures Lynn’s “priceless” response to Jackson’s unexpected call. She was overjoyed to hear from him!

“I will treasure this footage of two of my longest clients for the rest of my life,” Schleicher added. The video is embedded below.

Our hearts and prayers go out to Lynn’s family and friends. She is sorely missed.