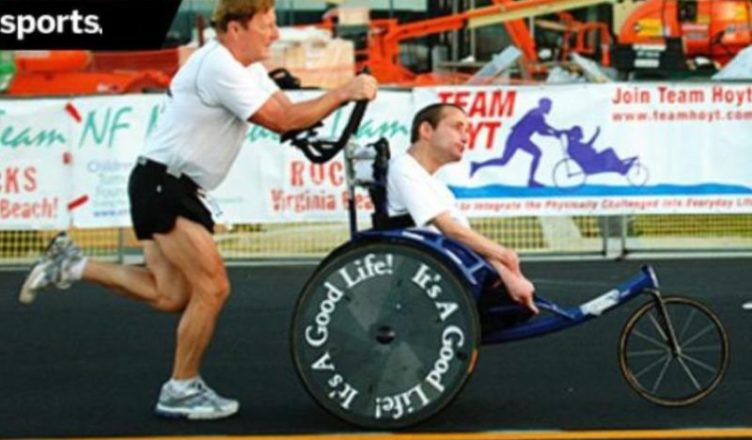 If there was an award for the best father in the world, an American named Dick Hoyt would undoubtedly win.

However, he was diagnosed with cerebral palsy.

This news nearly killed his parents… 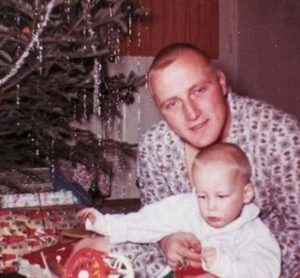 After all, at that time no one really struggled with this disease, and the child has only one way — to a special institution for people in a vegetative state, colloquially — “vegetables”…

Rick’s limbs were not working, he could only move his head a little.

When the boy got older, Judy’s mom hung pieces of paper around the house with the words “closet”, “door”, “wall” and began to teach Rick the alphabet. 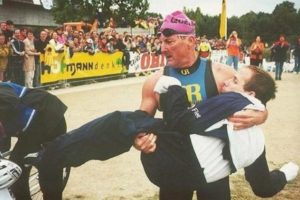 In 1974, Tufts University students in Massachusetts invented a special communication device for Rick.

Instead of Rick, this device pronounced the words that he typed with his head on a special console with a keyboard.

To pay for this device, the family’s father had to work multiple jobs. 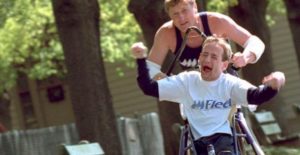 In 1977, in his computer voice, Rick told his father that he wanted to participate in a charity race in honor of a paralyzed boy.

Dick, who had never run, agreed, because he loved his son so much that he was ready for anything to make him happy.

Pushing a bulky and clumsy chair with his son in front of him, Dick ran 8.46 kilometers. 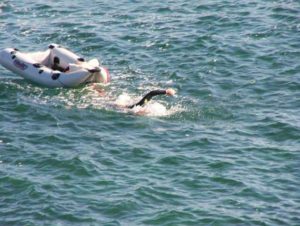 It was very hard for him, he rubbed his legs terribly, all his muscles ached, but they came to the finish line, the penultimate, but the audience applauded them as winners.

Returning home, the son said to his father: “Dad, when I run, I feel that I am no longer disabled.”

Now Dick understood what to do.

And since then, their lives have changed dramatically.

They began to build their sports career.

But they didn’t stop there. The brave “Team Hoyt” took part in the triathlon.

Dick not only ran, he also rode a bicycle and swam with his son. 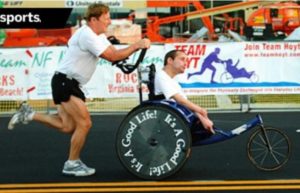 They have more than fifteen hundred races and triathlon competitions on their account.

The family is listed in the Ironman Hall of Fame, and there is a monument to them in Boston.

He was even an employee of Boston College, where he worked in a computer lab on projects of devices that would allow people with disabilities to communicate and perform various tasks.