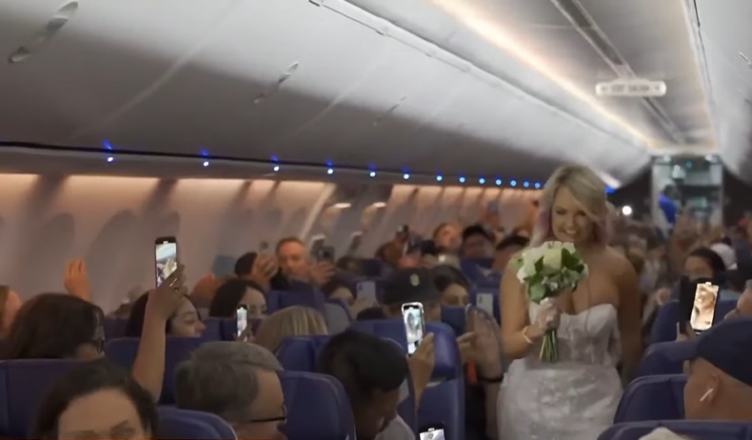 When Pam Patterson and Jeremy Salda, one couple from Oklahoma, met on the dating app in 2020, there was an immediate spark between them.

Patterson invited Salda out on a date after the two of them had been emailing one other for a few days.

She reflected on the event by saying, “It was simply one of those fantastic dates when you speak all night till 2 in the morning.” On the couple’s second outing together, Salda surprised them by bringing confetti and flowers for them to scatter all over the city.

Both had children from prior relationships, so they both understood the importance of a strong family unit.

In January of 2022, Salda raised the question when they were on vacation  on a beach in Cancun, he got down on one knee and proposed to Patterson as they were watching the waves.

They had always imagined having their wedding in Mexico, but in order to be married legally, they needed to do it in the United States first. The location of the wedding was going to be Las Vegas.

The appointment to get the marriage license was scheduled, and a hotel room was rented; however, after booking both of these things, their flight was unexpectedly canceled.

The pair hurried to find and book another ticket, this time connecting in Texas so they arrived at Dallas Fort Worth International Airport wearing a suit and a gown with the intention of rushing to the chapel as soon as they landed, but the weather forced them to remain indoors.

Chris Mitcham, a fellow traveler, spotted the pair and inquired about their destination on the flight and revealed that he was an ordained minister and volunteered to marry the couple if they were late for their appointment after they told him about their intentions.

The three of them decided to go together on the next flight, which would be departing from Love Field Airport, which was located close.

After a lot of effort, they were eventually able to board the aircraft, and while they were doing so, the captain asked them in a casual manner whether

Patterson planned to be married in Las Vegas. She responded by saying, “Well, we are going to try, but if it doesn’t work out, I guess I’m simply going to get married right here on this aircraft.”

The concept was well received by the pilot, who proceeded to inform the passengers that there would be a ceremony taking place aboard.

Flight attendants placed tissue paper ribbons, queued the music “Here Comes the Bride,” and turned on the call lights in anticipation of the arrival of the bride. After Mitcham had finished setting up the camera equipment, all that remained to be done was for Patterson to make his way down the aisle.

After that, the couple tied the knot at an altitude of 37,000 feet while flying over Arizona.