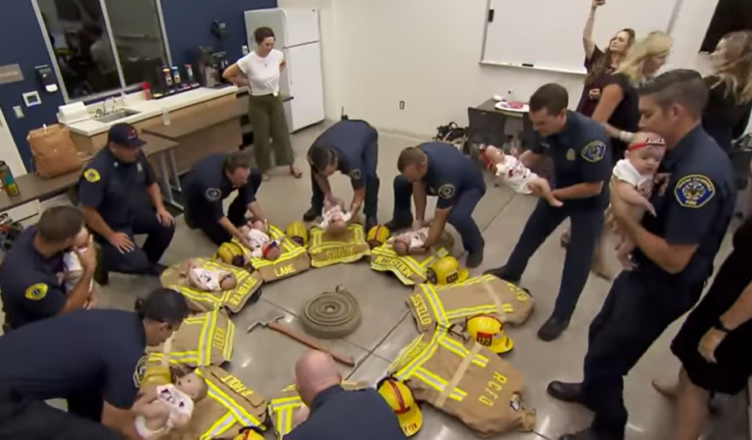 Between March and July of 2019, firemen employed by the Rancho Cucamonga Fire Protection District (RCFPD) welcomed a total of nine new children into the world, including two boys and seven girls.

The celebration photo session that followed created some of the sweetest photographs ever, such as the grinning dads holding their kids aloft in a row, and the newborns surrounded by firefighting gear — hoses, helmets, boots, and so on — writing out their names in firefighting equipment “RCFPD.”

Even though they were previously quite close, this group of firemen now has a link that cannot be broken and a family unit that is even more stable.

The nine firemen couldn’t believe it when they found out that they were all going to become dads within just a few months of one another.

“I remember when we found out there were like, six, and then it was like, oh no, wait, there’s seven, no there’s eight. Then we received information about the ninth. We were simply like, ‘I can’t believe it.'”

The members of the RCFPD and their spouses were overjoyed with the arrival of their precious little bundles of joy, and as a way to celebrate this momentous milestone and the happiness it brought, they decided to stage an incredible photoshoot.

The fact that all nine newborns were wearing their individual firefighting onesies while laying down on their fathers’ coats throughout the picture was maybe the nicest thing that happened during the session.