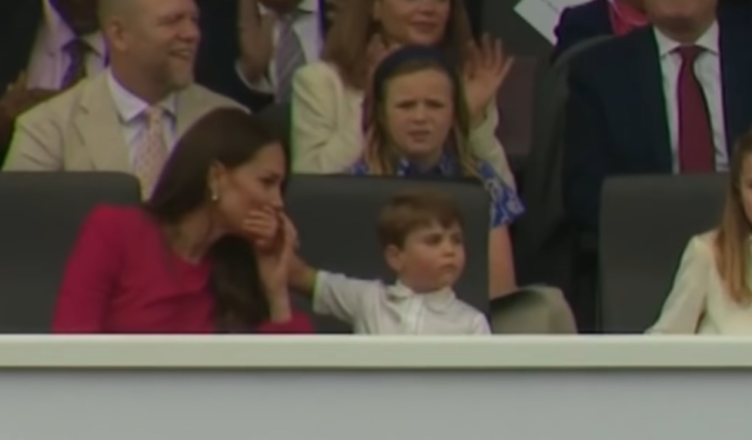 As though he’d had enough of the Platinum Jubilee, Prince Louis was noticed at the Jubilee Pageant putting his hand over his mom Kate Middleton’s mouth in order to hush her.

A video of the 4-year-old boy went viral almost instantly, with some people finding amusement in his mischievous behavior and others speculating how the British media would react if one of Meghan Markle’s children had acted in a like manner.

The Jubilee Pageant march on the Buckingham Palace Mall was shown live on television showing prince Louis making strange faces at his mother, sticking his tongue out at her, and covering her mouth with his hand whenever she tries to talk to him.

As soon as video was shared throughout social media, it gained approximately 200,000 views and 1,200 likes almost immediately. Others pleaded with the internet to have patience with the child and asked others to reprimand the poster for his conduct.

Someone on Twitter said, “They’ve forced this baby sit through days of public events that he’s presumably quite bored with.”

Another commenter remarked that if this were Archie, they wouldn’t let them forget about it for a long time.

It seemed as if Prince Louis was in a better mood as he joined his siblings, parents, grandparents, and great-grandmother, Queen Elizabeth II, for a final balcony appearance to close up the festivities for the weekend.

Meghan and Harry attended the Diamond Jubilee celebrations in London, although they did not participate in the Pageant.

They were there during the Trooping the Colour ceremony that took place on Thursday, but they did not pose for photographs with the royal family on the balcony of Buckingham Palace.

Additionally, on Friday, they were seen attending a service at St. Paul’s Cathedral in London. Allegedly, they spent Saturday in Windsor celebrating their daughter’s first birthday there with family and friends.